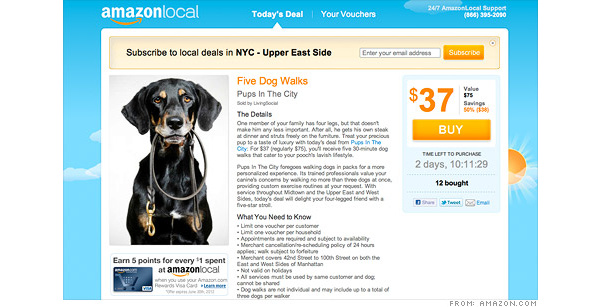 Amazon has announced it will sell $10 Amazon gift cards for 50 percent off on its daily deals site AmazonLocal on Tuesday.

The daily deal site is nine-months old but has seen little consumer interest compared to behemoths like Groupon and LivingSocial.

Says AmazonLocal VP Mike George: "Some folks, even if they're Amazon customers, don't know about us yet. This is going to draw a whole bunch of people to check us out.

It's hard for me to imagine anyone who wouldn't be interested in the deal. Amazon sells everything from Brazilian keratin treatments to snowblowers."

Amazon made a similar promo via LivingSocial last year, selling 1.4 million $20 gift cards for half off in just two days.

Local is available in 90 cities and is still expanding.