Android 4.2 accidentally leaves out the month of December in 'Contacts' app

In the stock People/Contacts app, the month of December is completely missing, making it impossible to add events or birthdays for any contacts if that occasion is in December.

The site says the bug has been reported to the Android bug tracker as bug #39692 with Google acknowledging it over the weekend:

Adds the site: "After digging through the AOSP source, I think the bug can be likely found in one of these commits, probably in the packages/apps/Contacts/src/com/android/contacts/datepicker/DatePicker.java file - if you spot it, definitely drop a note in the comments. I think it has to do with adjusting for indexes that start with 0 - "off by 1" bugs are quite common."

Expect Android 4.2.1 soon with the fix and other bug fixes, as well. 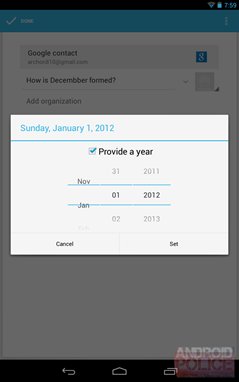