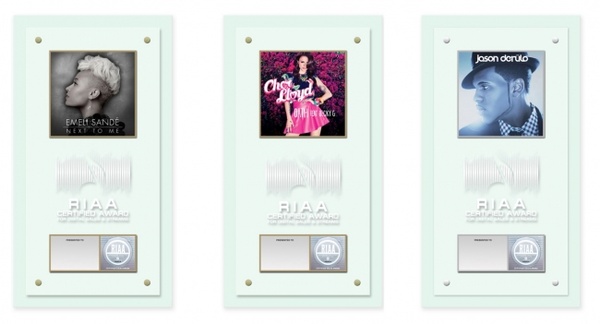 For the fith time since the 1950s, the RIAA has changed the way they calculate gold and platinum certification for single tracks.

Under the new system, 100 streams of a track will count as one digital download.

To go gold, you need to have 500,000 downloads (or physical copies), one million for platinum, and 2 million or higher for multi-platinum.

The RIAA says they will accept streaming data from YouTube, Spotify, Rdio, VEVO, MOG, Xbox Music, Slacker and Rhapsody with others to be included soon.

"Including music streaming in Gold & Platinum awards marks the continued evolution of the industry's premier program for recognizing artistic achievement, and it reflects the wide spectrum of ways consumers enjoy music from their favorite bands," said Cary Sherman, Chairman & CEO, RIAA. "The music business, along with its incredible array of digital service partners, is offering fans more access to music than ever before. We're thrilled that our awards will now more fully recognize artists' commercial success today."

This week, the RIAA awarded 11 Gold, 18 Platinum and 27 multi-Platinum awards to multiple artists under the expanded methodology. Check all the award winners here: RIAA.com