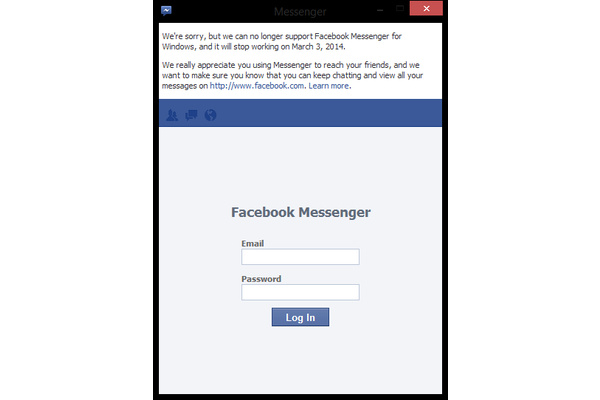 Facebook has confirmed that its Facebook Messenger for Windows service will be shutting down effective March 3rd.

The Windows version of Messenger had been around for over two years, and there is little explanation from the social networking giant as to why it is being shut down. Additionally, Facebook Messenger for Firefox will also end on the same day.

When trying to use the application, users are greeted with the message: "We're sorry, but we can no longer support Facebook Messenger for Windows, and it will stop working on March 3, 2014. We really appreciate you using Messenger to reach your friends, and we want to make sure you know that you can keep chatting and view all your messages on [ link ]

The app will remain available for iOS and Android, and a new Windows Phone app is on the way in the coming weeks.