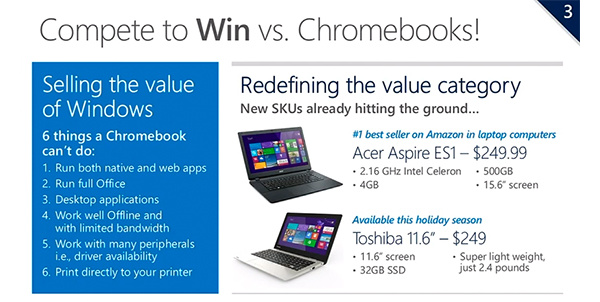 Microsoft will not allow Chromebooks to have another hot selling holiday season without at least trying to compete.

COO Kevin Turner revealed that Acer, Toshiba and HP will all release Windows laptops for under $250 this year, although Acer's is already available.

The Acer machine has a 15.6-inch display and a 2.16GHz Celeron processor along with a 500GB HDD. Toshiba's $250 device will have a 11.6-inch display, weighs just 2.4 pounds and has a 32GB SSD. There was no details on HP's $199 "Stream" Windows machine, but it's hard to imagine what specs are involved at such a cheap price.

"We are going to participate at the low-end," says Turner. "We've got a great value proposition against Chromebooks, we are not ceding the market to anyone."

While Microsoft is now competing on price, it remains to be seen if the underpowered devices can match the smooth performance of a Chromebook.