Malware-plagued laptop is auctioned for $1.34 million 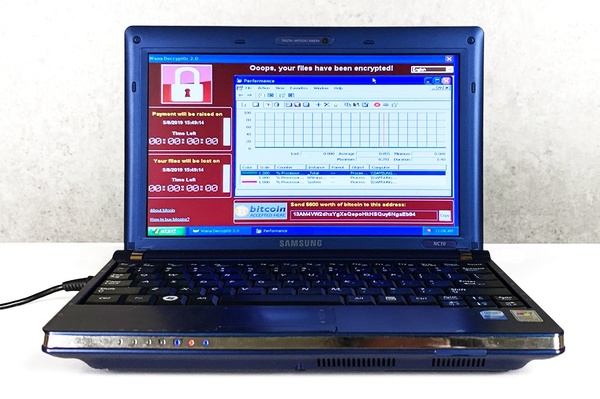 An artist has sold an old laptop infected with six of the most financially-damaging pieces of malware in history at auction for more than $1.34 million.

'The Persistence of Chaos' is the name given to this art project. It consists physically of a Samsung NC10-14GB 10.2-Inch Blue Netbook, running Windows XP SP3, that just happens to be infected with some of the most damaging pieces of malicious software that has spread around the world over the years.

In total, there are six pieces of malware running havoc on this system. ILOVEYOU is a virus that was spread via e-mail and file sharing, which caused over $15 billion in damages as it infected more than half a million systems. MyDoom was a rapidly spreading worm, and is estimated to have caused over $38 billion in damages.

SoBig is a worm/trojan that circulated through e-mail, affecting hundreds of thousands of systems and causing around $37 billion in damages. WannaCry is a piece of ransomware that affected at least 200,000 systems in 120 countries a couple of years back, causing an estimated $4 billion in damages. This malware was responsible for disruption to the UK's National Health Service.

DarkTequilla was a piece of malware that stole banking credentials and other data, mainly targeting Latin America. Finally, BlackEnergy is a cyber-weapon that was used in an attack that caused a widespread blackout in Ukraine in 2015.

According to Guo O Dong, the individual behind this messed up laptop, the whole point of this art piece is to provide a physical form for typically abstract digital threats. Dong was assisted by DeepInstinct in choosing the malicious software and using it safely. The laptop is kept air-gapped to prevent any unintended leaking of the malicious software. It is sold strictly as art or potentially for research purposes as it is illegal to traffic in malware for operational purposes in the United States.

Auctioned from the Persistence of Chaos website, the laptop has received a mind-boggling final bid of $1,345,000.