Guide: Turn an Old Computer Into a Chromebook Easily and for Free 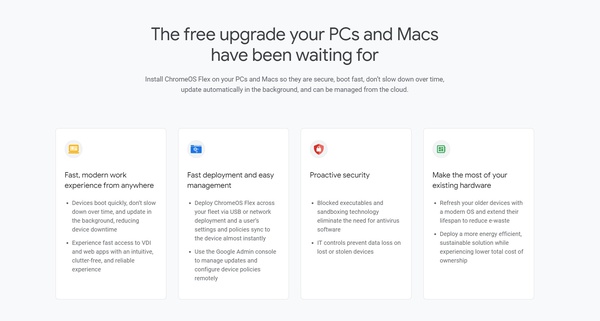 Do you know someone whose computer is way beyond its best-before date, and they, unfortunately, do know have the skills or the expertise to do much about it? Or do you own a pile of old laptop computers that do not have any use as is?

Google offers a simple and straightforward solution for these situations: ChromeOS Flex. The new ChromeOS version released in the summer of 2022 turns any old Windows, Linux, or Mac computer into a Chromebook. And what's better, it's all free.

Chromebooks and the operating system run on them, ChromeOS, are meant to be a lightweight solution that removes most of the unnecessary clutter that comes with a regular computer. Moreover, much of the computing happens in the cloud, which makes having powerful, heavy, high-consumption components unnecessary. This means that even a lesser computer can run ChromeOS efficiently.

The only thing you'll need in addition to the computer the operating system is going to be installed on is an empty thumb drive. As you test out the OS, everything is run from the thumb drive, so no files will be lost at first.

Google promises the compatibility of ChromeOS Flex only on officially supported devices, but our experiences are that ChromeOS Flex seems to work on practically all somewhat old Windows computers. However, Apple's computers, using the new proprietary Apple chip, do not work with ChromeOS Flex.

One might also have a really old PC that ChromeOS Flex will not be supported on. The processor has to be 64-bit and the system needs at least 4 gigabytes of RAM. A good rule of thumb is that anything manufactured before 2010 might not work well with ChromOS Flex.


The installation of the trial version only requires a thumb drive with at least 8 GB of free storage space. You'll need to create an image of the ChromeOS Flex on the drive according to Google instructions.

Next, the computer that ChromeOS Flex is heading to needs to be restarted using the USB thumb drive. This often requires changing the settings on the BIOS or UEFI, to which instructions are often motherboard manufacturer-dependent.

When the computer has been set to use a USB thumb drive as a startup media, the computer should launch straight into ChromeOS Flex.

At this point, one can choose to either install ChromeOS Flex on a different media, be it an HDD or an SSD, or try it out on the thumb drive. It's recommended that one tries the experience carefully before installing. If the operating system seems to provide what the user is looking for, the installation is easy by returning to the menu after restarting the computer. Instructions for permanent installation can be found on Google's webpage.

The permanent installation removes the current operating system, be it Windows, Linux, or Mac, so a backup is recommended. At least securing all the important files before installing ChromeOS Flex is suggested.


ChromeOS is originally designed for Chromebooks. This means that ChromeOS Flex might not support all the features and options that every other computer has. For example, things like CD drives and fingerprint sensors might not work on ChromeOS Flex as they do in Windows. Printers also work differently from Windows, so you might want to make sure your printers are available and working.

By taking time to get to know the operating system before installing it, you'll likely avoid most of these issues.

If there seem to be no issues, ChromeOS Flex might be just what you are looking for the revive an unused or struggling computer.